What Impact Is AI Having On Big Data Analytics In Australia?

Australia’s leading companies need to have a better understanding of the rapid rise of Artificial Intelligence (AI) and what it means for their business. Over the last few years there has been a strong focus on big data, but there is not much awareness of AI among executive teams, apart from the general buzz. It’s important for CIO’s and other business leaders to understand the impact AI is having on big data analytics and their business as a whole, before they get left behind.

Business intelligence (BI), also known as business analytics, is set to be transformed yet again as a result of big data and AI. As we continue into 2018, we’ll see the lines between business intelligence and artificial intelligence blurring even more. Thanks to the current capabilities of machine-learning systems that are capable of identifying patterns, habits and trends. Every board of a major ASX company is telling their CEO they’ve got to have a data analytics story and big data story, but what about an AI or machine learning story?

Many are already foreseeing big data to make a huge difference in the overall AI and machine learning landscape. In the annual Big Data Executive Survey conducted by NewVantage Partners this year, 88.5% of top executives surveyed were found saying that AI is going to be the most dominant factor that will have a disruptive impact on their companies.

To understand AI in ways that drive businesses, we must first start with something that business is familiar with - business intelligence or business analytics. BI software provides data and analysis to help business leaders make more informed decisions. The simplest BI systems are descriptive reporting engines that summarise business operations and tell you what has occurred. As data volume grows some BI software systems then incorporated predictive analytics.  This is using data to infer a likely outcome, such as forecasting the future trajectory of your data or the use of sentiment analysis - a kind of predictive analytics that analyses text data, such as social media conversations, and infers how the consumers feel about a product or a brand. Anyone who has ever shopped at Amazon or watched Netflix knows predictive analytics. These platforms recommend products or movies by optimising the similarity to our preferences.

Prescriptive analytics in advanced BI can recommend actions to optimise business processes, marketing effectiveness, ad targeting and many other business operations.  Regardless of what the analytics might suggest though, it is the human decision makers still who invariably make the final decisions on what to do. It’s artificial intelligence that then takes that next step.

Big data analytics is not new in Australia. Companies such as Woolworths for example, invested millions into big data in a bid to better analyse the online and in-store spending habits of its consumers. Meanwhile, telecommunications giant Telstra has been building its analytics assets for over four years, and is using big data to drive improvements in its customer service among other things.

Today’s big data and parallel computing infrastructures which use graphics processing units (GPUs) have alleviated data and computing constraints around data volumes, processing power and the level of sophistication in predictive models. This has unleashed the creativity of data scientists and provided them with the freedom to use much more sophisticated models that form the basis of AI.

Simply put, the essence of AI is the automation of decisions from prescriptive analytics and the proper execution of all subsequent actions.

This requires AI to leverage real-time feedback loops from interconnected machines and databases that enable AI to learn from every experience and get smarter with every decision it makes.

Real-time feedback already exists in most prescriptive systems because it is closely related to the objectives that are being optimised. AI uses this constant stream of feedback data to feed its machine learning engine. This machine learning updates and improves our prescriptive analytics so the next prescribed decision is optimised even further to bring it closer to, or better than, what human experts would do.

It is useful for companies to look at AI through the lens of business capabilities rather than technologies. Broadly speaking, AI can support three important business needs: automating business processes, gaining insight through big data analysis, and engaging with customers and employees.  Taking a closer look at gaining insight through data analysis, progress in machine intelligence has had a number of impacts on big data analytics, in particular:

The consensus seems to be that AI-driven automation will spur productivity and prosperity globally among business. The reason is automation is primarily designed to drive human productivity and not human redundancy. A survey by Avanade found that 31% of organisations have already started using intelligent automation to break through the productivity plateau, with the number set to double by 2020.  Moreover, 86% of respondents believe they must deploy intelligent automation to be a leader in their field. The problem with Australia is that we are already a fair way behind the rest of the world.

The recent report, The Automation Advantage, commissioned by Google and conducted by AlphaBeta, found automation presents a $2.2 trillion opportunity for the Australian economy and could potentially create millions of jobs. The report found Australia lags behind the rest of the world with only 9% of listed companies making sustained investments in automation, compared with more than 20% in the United States and nearly 14% in leading automation nations globally.

According to the report, if Australia accelerated its automation uptake it would stand to gain up to another $1 trillion over the next 15 years.

With this in mind, rapid advances in artificial intelligence will result in fundamental changes across the business landscape within the next few years, according to technology experts. Powered by sophisticated algorithms and with the ability to learn over time, AI will be increasingly used in everything from accounting and legal analysis tools to heavy machinery and autonomous cars.

In Australia businesses have been looking at technologies to transform a financial services company’s credit risk modelling, or an oil and gas company’s insight into their data. While the accounting and legal sectors are two that will experience significant disruption from AI in the short to medium term. Many tasks that previously have been undertaken by junior staff will readily be handled by AI. For example, the task of trawling through large quantities of case law to determine the likelihood of a new case succeeding could traditionally have occupied a team of young lawyers for days or even weeks. Such a task could be completed by an IT tool in just minutes.

Similar efficiency benefits will also be seen within accounting firms where many low-level, repetitive tasks can be handled by software rather than humans.

According to predictions by research firm Gartner, AI technology will be embedded in virtually every new business software product by 2020. The firm says that, by that time, AI will have become a top-five investment priority for more than 30% of all corporate CIO’s.

The following survey by Deloitte published recently in Harvard Business Review on Artificial Intelligence and The Real World found that of those executives familiar with their companies’ use of cognitive AI technologies, more than half said their primary goal was to make existing products better, followed by optimising internal business operations and freeing up workers to be more creative in automating tasks, followed closely by making better decisions. 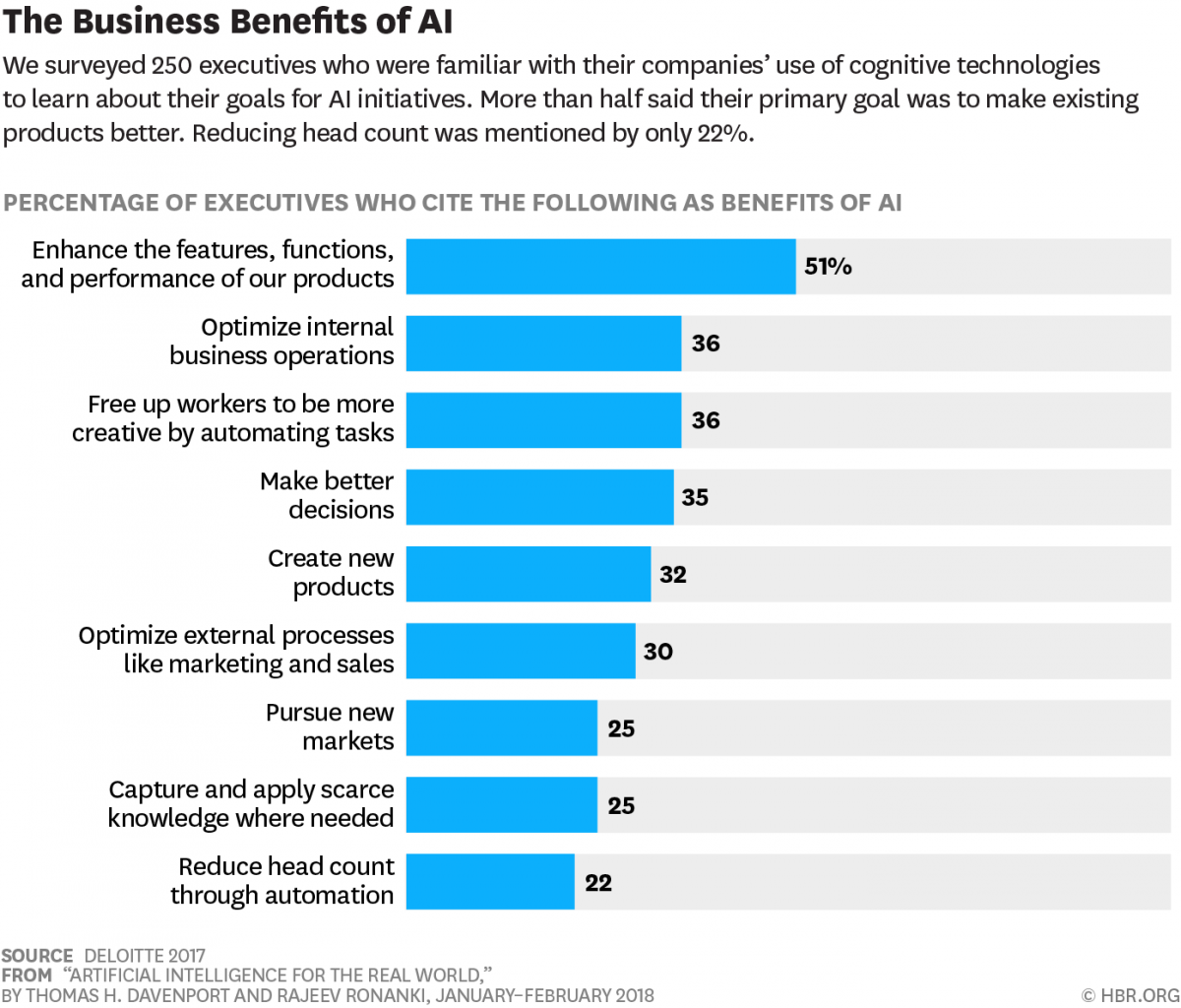 In fact, The Automation Advantage report mentioned earlier cites that AI could lead to an 11% fall in workplace injuries, a 20% rise in wages for workers who are redeployed to non-automatable tasks, and an increase in job satisfaction for 62% of low-skill workers as they focus on more creative and interpersonal activities. A retail worker might spend nine hours less on physical and routine tasks like stocking shelves and processing goods at the checkout and nine hours more on tasks like helping customers to find what they want and providing them with advice. Teachers might spend less time entering exam scores and more time with students.

The consensus is that AI driven automation will stimulate productivity delivering better interactions and decision making in a variety of areas for Australian businesses.  As we progress to a future where AI has the potential to significantly boost the Australian economy and affect many areas of our lives, including opening more opportunities for big data analysis, it’s no surprise that heated debates around employment, security, public safety, rights of robots, regulation, and social and ethical considerations, are now bubbling to the surface.

The 2022 Gartner Magic Quadrant for Analytics & Business Intelligence Platforms report is out. Read why Qlik was rated for the 12th consecutive year as a Leader.
By Sonia Johnson on Mar 28, 2022

Results from the world's largest survey of BI & analytics users are in. Qlik was rated #1 in 6 categories including for business value, project length & analyses. Access the report here.
By Sonia Johnson on Mar 17, 2022
< Back to all news 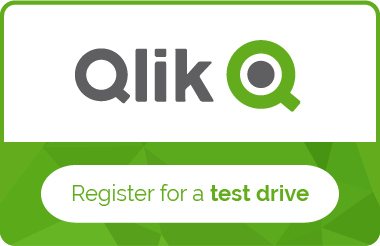